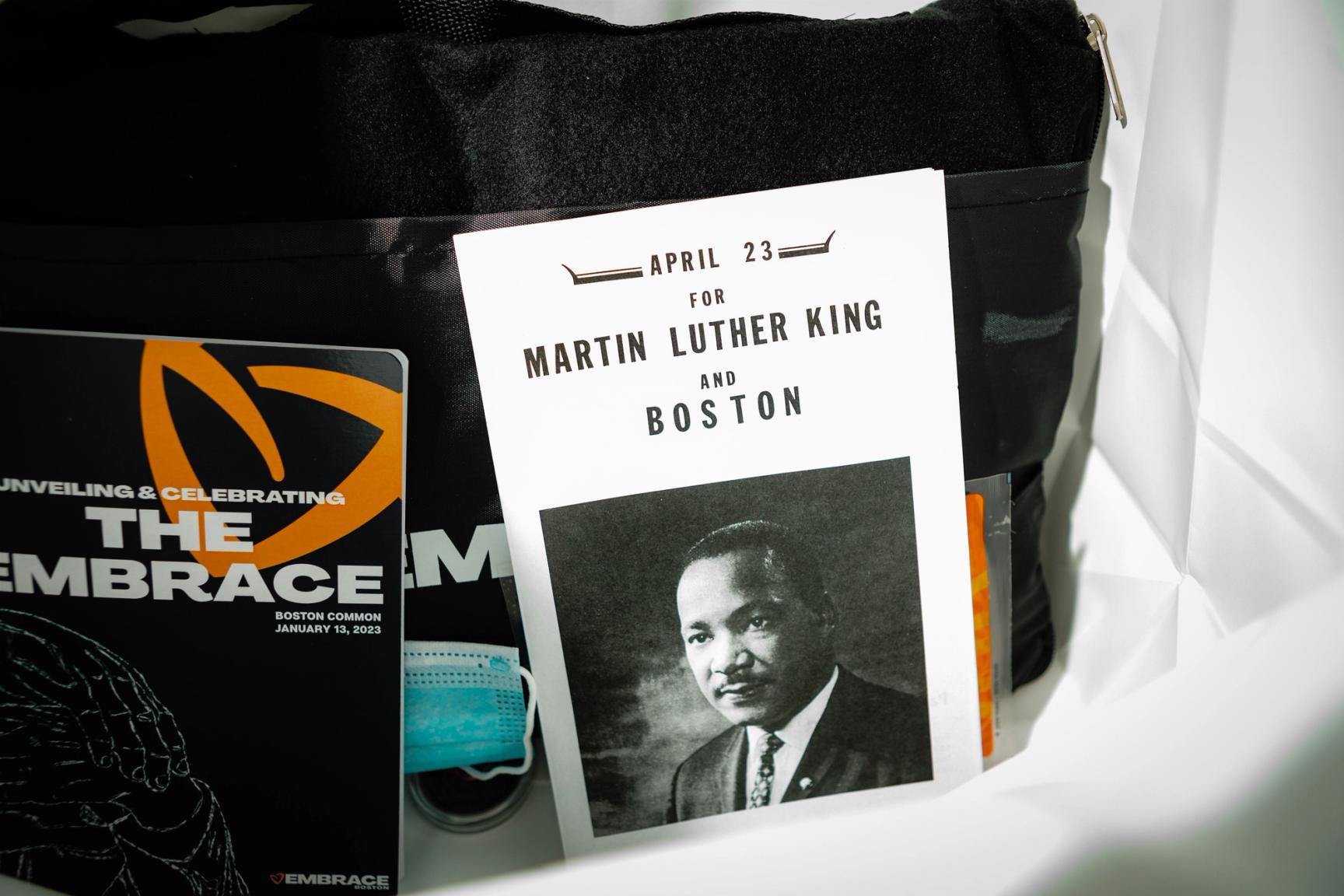 The Embrace Memorial was officially unveiled on the historic Boston Common commemorating the legacies of Dr. Martin Luther King, Jr., and Coretta Scott King who met and went to school in Boston. Years in the making, the 20-foot-tall, 40-foot-wide sculpture symbolizes the hug Dr. King, Jr. shared with his wife, Coretta, after he won the Nobel Peace Prize in 1964.

“The Embrace is a long-lasting symbol of the King’s legacy, their love, and the impact of that love on us all. The Embrace is also about teamwork, and I’d like to thank the many individuals, the City of Boston, and our numerous sponsors, who came together to make this a reality,” says
Imari Paris Jeffries, Executive Director of Embrace Boston. “The Embrace sculpture and the surrounding 1965 Freedom Plaza embodies our organization’s vision of a transformed Boston, inviting all who walk within it to witness the legacy of equity in Boston, and see themselves reflected in its future.”

“The City of Boston’s cultural reckoning is more than symbolic,” said Mayor Michelle Wu. “The Embrace serves as a call to action for the City as we continue to pursue equity, diversity and community.”

“This is a historic year for Boston and Massachusetts,” said Governor Maura Healey. “The Embrace’s presence in the Boston Common celebrates the city’s legacy of diversity and ushers in greater, more inclusive progress throughout the state.”

“The Kings’ time in Boston was pivotal for the city and the civil rights movement,” said Congresswoman Ayanna Pressley. “Committing to their vision of radical, revolutionary change, The Embrace reminds us how far we’ve come, and the work yet to be done.”

World-renown conceptual artist Hank Willis Thomas and global award-winning design firm MASS Design Group led by principal Jonathan Evans, were selected by a committee of local organizers, artists, and community members as the designers for the memorial and plaza. The sculpture made a cross country journey from Washington State, where it was built at the Walla Walla Foundry, in multiple trucks each carrying pieces of the monument.

“The Embrace is a testament to what we can achieve when we come together,” said artist Hank Willis Thomas. “The sculpture embodies people’s capacity for love, change and hope for the future.”

“From ideation to creation, building The Embrace was an exercise in intention,” said Mass Design Principal, Jonathon Evans. “We’re honored to be a part of the history it celebrates and embrace the future it represents.”
The Embrace memorial, situated within the 1965 Freedom Plaza, also honors 69 local civil rights leaders active between 1950-1970 to uplift the under-told stories of Boston’s Black and Brown community members. Told through Embrace Boston’s website and an audio experience APP, their stories bring the monument to life as an interactive public archive.

Available to the public now, The Embrace is now a permanent fixture in Boston landscape, and a cornerstone of equity and justice for Boston residents and visitors. The monument and the surrounding 1965 Freedom Plaza serve as a stepping off point into an anti- racist, welcoming and radical Boston as the city approaches its 400th anniversary in 2030.